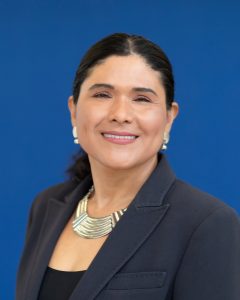 As an attorney, Virginia Villegas has dedicated her career to working on behalf of low-wage and mostly monolingual Spanish-speaking, immigrant workers in California.

After graduating from The University of California, Hastings College of the Law in 1995, Ms. Villegas worked at La Raza Centro Legal, a community based non-profit organization until May 2001. As the Supervising Attorney of the Workers’ Advocacy Project, a project created to represent and educate Latino workers of their employment rights, Ms. Villegas won significant victories for some of the most vulnerable and exploited workers such as day laborers, janitors, restaurant workers and domestic workers. Ms. Villegas also developed training and curricular materials, in English and Spanish, to provide educational workshops to other attorneys, advocates, student volunteers, law student interns, and low-wage workers. While at La Raza Centro Legal, Ms. Villegas also served as an instructor at San Francisco’s City College where she taught a bilingual Workers’ Rights and the Law course.

Since May 2001, Ms. Villegas has been a partner at Villegas/Carrera, where she serves as the firm’s managing partner and has continued to concentrate her practice on employment litigation including wage and hour claims, discrimination and harassment matters, and wrongful termination in violation of public policy. Ms. Villegas’s also has substantial experience in representing groups of workers in wage and hour class actions and representative claims under the California Private Attorney General Act (“PAGA”).  Ms. Villegas represents workers in both state and federal courts and before state and federal administrative agencies, including the California Department of Fair Employment and Housing (DFEH), California Division of Labor Standards Enforcement (DLSE) and the U.S. Equal Employment Opportunity Commission (EEOC).

Since 2015, Ms. Villegas has been an adjunct professor at UC Hastings College of Law teaching and coaching the Client Counseling Team that competes throughout the country. During the Fall 2011 Semester, Ms. Villegas also served as a visiting Clinical Professor at Golden Gate University Women’s Employment Rights Clinic. Under Ms. Villegas’ supervision, law students advised, counseled, and represented clients in a variety of employment-related matters including wage and hour violations, discrimination, and unemployment benefits.

Ms. Villegas currently serves as the Chair of the Board of the Directors of the California Rural Legal Assistance Foundation.  On November 30, 2006, Ms. Villegas was appointed to the Sweatfree Procurement Advisory Group by the San Francisco Board of Supervisors and served on that Board for two years. Ms Villegas has also served on the Board of Directors of the AIDS Legal Referral Panel, Center for Young Women’s Development, San Francisco La Raza Lawyers Association, Discrimination Research Center and the Homeless Prenatal Program.