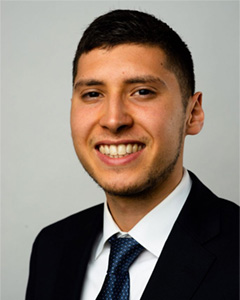 Paul Grant-Villegas, an associate at The Villegas Law Firm, APC, was born and raised in San Francisco, California, to a Peruvian Mother and an American Father. Paul attended the French American International School where he became fluent in French and studied alongside students with international backgrounds. His multicultural upbringing sparked his passion for immigration rights and politics, which later influenced his decision to go to law school and practice employment law.

In 2017, Paul graduated from the University of California, Santa Cruz, with a Bachelor’s Degree in Politics and graduated with Honors in his major. As a college student, Paul volunteered at Catholic Charities in San Francisco and assisted the immigration unit to provide legal services to immigrants seeking visas or naturalization. Paul also interned at the Joint United Nations Programme on HIV/AIDS (UNAIDS) in Geneva, Switzerland, where he assisted the Human Rights and Law Division advocate against laws and policies which hinder the global response to the HIV/AIDS epidemic.

After college, Paul attended the University of San Francisco (USF) School of Law and graduated with a Juris Doctor degree in 2020. As a law student, Paul undertook various legal internships related to human rights and immigration. Paul interned at the San Francisco Public Defender’s Office where he assisted attorneys in the felony division with their representation of indigent criminal defendants.  Subsequently, Paul interned at Dolores Street Community Services where he assisted immigration attorneys with asylum claims, deportation defense, and U-visas. In addition, Paul participated in USF’s international human rights clinic where he researched how the use of armed drones violates international human rights law and presented that research to the United Nations Human Rights Council in March of 2019. Finally, Paul interned at the Center for Justice and Accountability where attorneys use litigation to hold perpetrators accountable for human rights abuses, develop human rights law, and advance the rule of law in countries in transition from periods of abuse.

In September 2021, Paul joined Villegas Carrera, Inc., as an associate attorney in order to continue to use the law to serve marginalized and low-income people.